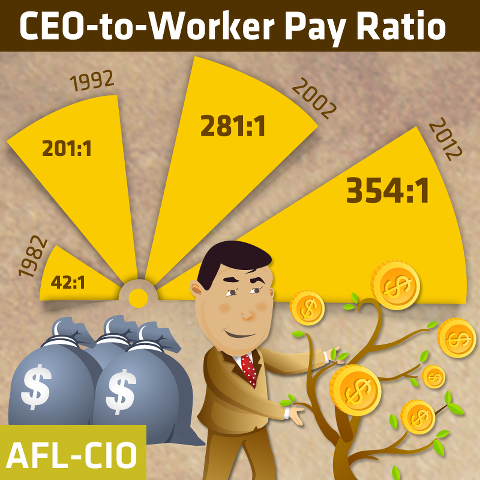 CEO pay was 354 times that of the average worker last year, according to the AFL-CIO’s new Executive PayWatch database. The labor group asserts that this is “by far the largest pay gap in the world.” In 2012, the chief executives of some of the country’s largest companies earned an average of $12.3 million in compensation compared to the average worker who took home a salary of $34,645.  “American chief executives continued to do very well for themselves last year, while workers struggle to make ends meet,” said Richard Trumka, president of the AFL-CIO. “We are calling out the hypocrisy of rich CEOs who have the gall to ask for corporate tax cuts to be paid for by squeezing the retirement security of working America. The American public deserves to know the truth about their self-serving agenda.”

The Executive PayWatch database allows users to not only look up CEO pay, but to also compare their own salaries. Last year, the average worker made $19.77 an hour. In comparison, Richard M. Bracken, CEO of HCA Holdings (HCA), earned $22,288 an hour; David M. Cote, chairman and CEO of Honeywell International (HON), made $15,984 an hour; John C. Plant, chairman, president and CEO of TRW Automotive Holdings (TRW), made $12,597 an hour and Andrew N. Liveris, CEO and chairman of Dow Chemical (DOW), took home $11,052 an hour.  “One of the most important and some would say disturbing trends in the U.S. economy over the last twenty years has been the rise of inequality,” says The Daily Ticker’s Henry Blodget. “The rich are getting richer at an astounding rate and the poor and the middle class are staying where they are and this is creating a huge dichotomy in this society.”

According to the AFL-CIO Web site, CEO pay skyrocketed from 42 times the average blue-collar worker’s pay in 1980 to 343 time in 2010. “Not only is U.S. CEO pay out-of -whack with historical norms, it is off the chart globally,” says Trumka. “For example, in Switzerland, where voters recently imposed new limits on executive pay, the CEO-to-worker pay gap is 148 times. In the United Kingdom, the CEO-to-worker pay gap is one-quarter as large as ours. And in Japan, the gap is even smaller.”